Akkineni Lakshmi Varaprasada Rao, popularly known as L.V. Prasad, is a phenomenon bestowed to the film industry and the society equally. Dada Saheb Phalke Award winner, first Telugu actor to join the cast of Alam Ara (first sound film of India), and many such firsts were achieved by this legend.

Gemini Studios was an Indian film studio based in Madras, Tamil Nadu. It was launched when film producer S. S. Vasan bought a film distribution concern at an auction and renamed it. The new studio opened under the name Gemini. The new façade had statues of ‘The Gemini Twins’, blowing the bugle.

The modest farmer couple Akkineni Sriramulu and Basavamma belonging to a remote village, Somavarapadu, Eluru Taluka, Andhra Pradesh, gave birth to a legend, by the name Akkineni Lakshmi Varaprasada Rao on 17th January 1908. He was the second born to the agricultural parents. 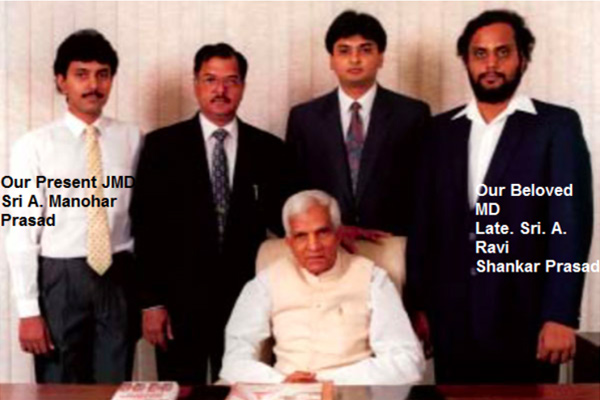 At a very young age, 17 years, in the year 1924, Prasad entered into the wedding lock with his maternal uncle’s daughter Soundarya Manoharama. Prasad, through his network, heard a lot about a happening studio named Kohinoor in Dadar that was known for making cinemas and assembling artists. With this news and big dreams, he landed at this place.

Prasad, along with his wife, moved to Mumbai. Mumbai brought in luck for Mr. Prasad as he always dreamt. He chanced upon becoming an assistant director under Imperial production for the movie Kamar – Al – Zaman under the guidance of Ali Shah. It is the time when his name shortened from Akkineni Lakshmi Varaprasada Rao to L.V.Prasad. His first nexus with Prithviraj Kapoor, LV Prasad joined Prithvi Theatres. Here he met Raj Kapoor, the hero of his first production, Sharada. The year 1943, came as a bearer of good news, as he got an opportunity to work as both an Assistant Director and Hero of the movie, Gruha Pravesham (1946). This movie was acclaimed, garnered a lot of appraisals, and called one of the finest films of the 40s. Later Prasad gained an essential role in the move ‘Drohi’ directed by K.S.Prakasha. At the same time. After which, in the year 1949, LV Prasad launched N.T. Rama Rao in a small role in the movie Mana Desam. In 1950, under the banner, Vijaya Pictures, with N.T.Rama Rao, as the main lead and Shavukaru Janaki, as the female lead, Prasad directed the movie ‘Shavukara.’ The film turned out to be a super hit.

After this, Prasad started building an ideal and extraordinary Filmography performing multiple roles as a director, producer, and actor too. Here’s a peek at his achievements.

LV Prasad became a famous and an exceptional director with many hit movies of various genres in his kitty. LV Prasad Productions was established in the year 1956. Apart from all the movie and film-related activities, LV Prasad always nurtured an idea of establishing an eye hospital, as he believed that eyes are one of the most important organs to experience and enjoy life.

LV Prasad is a person who never dithered to face struggles, whose intuition and determination was so strong that resulted in a benchmark for many generations to come can be no less than a Legend. In the year 1982, Mr. Prasad’s hard work and contribution to the film industry and the society did not go in vain, as the Government of India crowned him with the most prestigious award – Dada Saheb Phalke Award.

© All Rights Reserved By GEMINI FX Designed By LOONEYCODES